Finally we have time to blog about this (being officially on holiday since a week :). A few weeks ago we were invited by Wolfgang Spießl, a friend of mine and student of media informatics at LMU, to take an active part in a user study. Wolfgang and Nicolas Villar, main developer of Voodoo IO hardware devices, built a system to connect those devices to flash (the whole project is supervised by Hans Gellersen from Lancaster University and Albrecht Schmidt from LMU – yeah, lots of names and links ;).
So what exactely is Voodoo IO?
Voodoo IO is a system consisting of different hardware controls (buttons, knobs, sliders etc.) which can be freely “pinned” into a substrate material. The substrate acts both as a power supply for the controls and a network medium, so you can connect the controls to a pc, for example.
(much more information can be found on the Voodoo IO website…check out the videos and publications).

One of the main benefits of this technology is that you can quickly build and arrange a control interface to make a physical prototype of some device – which was the design task we were given at the user study. Our task was to design a simple internet radio and figure out how to connect the hardware controls to the flash environment. All controls have a “sofware representation” in the form of flash components (just as other flash components: drag them out of the components panel onto the flash stage and set the properties). Additionally there’s a command line application running in the background which monitors all events and passes them to flash through a socket connection.

Of course all the implemention details are hidden in the components so the only thing you have to do is check the docs which events and methods are available, give the component an id and then write code which is triggered by the events (onManipulated, onAdded, onRemoved etc.). When everything is hooked up, the real cool moment is when you first play around with the hardware controls and see your flash gui react in realtime. See the pics below…
There are some interesting possibilities what else you can do with Voodoo IO, e.g. they’ve used it to create a cockpit for playing MechWarrior 4 or connected it to the audio software Propellerhead Reason. Imagine Andre Michelle’s latest ActionScript3 audio experiments connected to some real hardware…

I hope the project is further developed and sometime available for purchase ;). 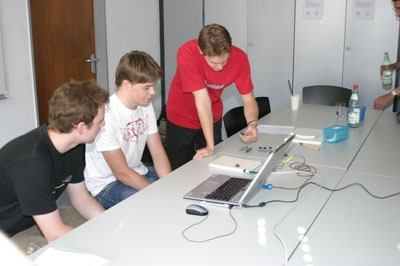 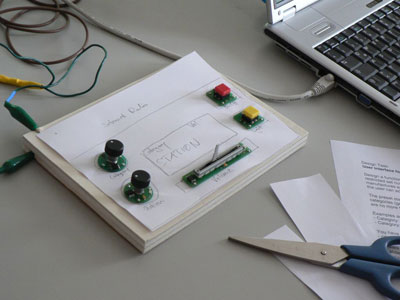 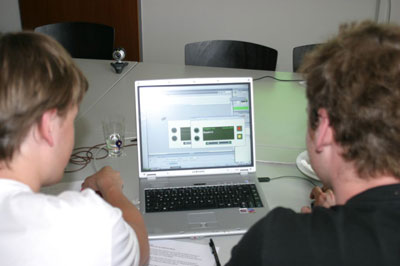